In 2013 Freefly Cinema introduced the Mōvi camera stabilizer to the world. I must have not been alone in drooling over the introduction videos. They had my curiosity, but when they promised it would work with the Red Epic, they had my attention. If you don’t know what the Mōvi is, you should find out – it’s an incredibly useful piece of kit, with it’s own quirks and deficiencies. But in a few words; it’s a stabilizing rig based on the technology camera helicopter rigs use to balance out the shakes and vibrations of the copters. They just apply the technology to the shakes and vibrations of human operating, thus creating (theoretically) a handheld camera rig that produces steady shots like a dolly/steadicam would.

In my mind the film we were going to make that summer would be one of nearly constant camera motion, with very few “obviously handheld” moments. It was going to be steadicam, but what always bothered me about the good ol’ steadi was its limited ability to move up and down. The Mōvi promised to move exactly where the operator would move it. It would be possible to transfer it from one operator to the next, and stabilization would even out the bumps along the way. This seemed to solve quite a few problems, and open up the possibility to do the kind of shots you could basically only do with a Technocrane and loads of time (though nobody would do them on a Technocrane, because to do simple character tracking shots with gear that costs thousands a day is the kind of insane reserved for Peter Jackson only). 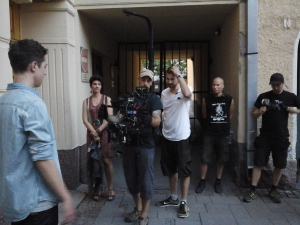 So we booked the Mōvi for the majority of our summer shooting days. Because of delivery delays, we were pretty much the first production to use it in any major scale in Finland. Our test day revealed quite a few problems. We were going to shoot with the Cooke S4 lenses, but they were too heavy for Mōvi’s gyros. So we had to subrent S4 Mini primes. Lens changes would be difficult (take time), but not as difficult as calibrating the Mōvi every time it would be taken off the gimbal and then returned to it. So a decision was made to have two Red Epic camera bodies with us all the time, and when we used the Mōvi, one body would stay on it the entire day. These complications meant additional costs, but not significant ones. It was affordable, and in my mind, the get was worth it. So we designed the shots for the Mōvi, with no real backup plan. Here’s a plan for a succession of three scenes (one song), most of it being done in three Mōvi movements: 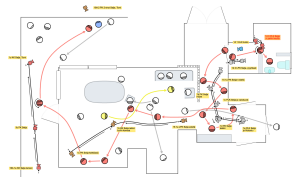 The camera was operated by Peter Salovaara, who is probably now the foremost Mōvi operator in the country. He operated the 19 shooting days we used the gimbal, and then was the cinematographer-operator on a music video for me, again with the Mōvi. The first thing we discovered was that the rig we had had built was not a light one. It weighed around seven to eight kilograms with all the batteries, video transmitters, lens control servos and receivers, and matteboxes. That much weight becomes pretty hard to hold at arms length for any extended periods of time. The camera crew experimented with the Easyrig support system, but it sort of undid the whole idea of using the Mōvi, as it once again limited the up-and-down axis.

So it was up to Peter’s arm and back muscles to do the job (luckily, those were some impressive muscles). He ran with our actors, did loops around them, started shots crouching down and ended them standing on platforms, and this continued day in day out. We also did some shots with “handoffs”, where Peter would execute most of the choreography, then hand off the rig to our DP Joonas who would finish it. Peter had the camera on a descending construction crane, then handed it down to Joonas waiting below, who then followed the actors. Or they’d hand it over a bar counter and then pan it back to the direction where the camera came from, revealing what would have in any other situation been a dolly track, but this time just scripted action (and one camera op crouching below frame). 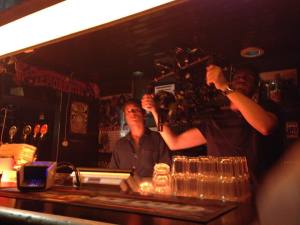 The result I can’t yet show you, but it has a beautiful feel to the motion that I don’t recognize. The camera does things it’s not “supposed” to do. A professional viewer will probably stop to ponder the shots, but the uninitiated will simply watch a movie that will feel different, that has a freshness in its visual quality they can’t quite put their finger on. At least that’s my goal. And if you don’t understand why what Peter did is impressive, try carrying around an 8 kg kettlebell at arms length for hours and hours, executing precise moves. 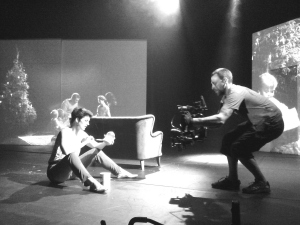 The material is not without problems. There will be post-production stabilization needed for pretty much all of it, thought it is simpler than stabilizing basic handheld material, as the Mōvi pretty much eliminates tilt and roll, and those are the things that cause warping and artifacts in stabilized shots. Also, because we opted to use a single-operator mode for the rig (it allows for a second operator to precision-guide it via remote control), the compositions were not always ideal or exact. The rig would stop pans where it would please, and there was really not a lot to be done, except to feel things out and learn how the gyros work. Peter did this with admirable dedication, and the later shooting days have much more precise compositions. We were however prepared for this: shooting full-frame 5K for a 2.39:1 cinemascope finish, we framed the shots with 10% extra on the sides and quite a bit more on the top and the bottom. Now that we’re in the offline stage, we are constantly recomposing shots, zooming in, zooming out, moving them in all three axis, keyframing the motions where necessary.

I actually really like this workflow and the ability to recompose shots. We will probably end up with over 50 percent of shots adjusted for composition, and I think the storytelling will benefit. We won’t need to cut as much, we can carry out more extended shots because instead of hiding deficiencies, we can correct them. 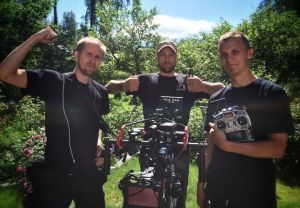 Would I recommend the Mōvi for all camera movement? Absolutely not: first of all, it is pretty much solely a device for wider lenses. The gyro movement becomes too accentuated, too visible with longer focal lengths. Second, the difficulties in calibrating the rig and movement rehearsals required to execute complex coreographies need to be treated as special cases in scheduling. So if you just need a simple push-in, use a mini dolly (we did, constantly). But to the reserve of camera motion devices it is a welcome addition. It does things you can’t do with a dolly, a steadicam or a crane. And there are lots of things you can do with those that the Mōvi can’t do. This should be obvious, but I think it needs to be stated. It is a new tool, not a replacement for old ones. 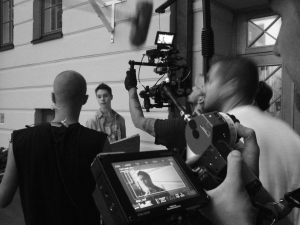 A few weeks after our summer shoot ended I directed a music video for Elias Kaskinen ja Päivän sankarit. Maybe it was because our entire summer had been filled with musical numbers executed with complex camera moves, but when I heard the song I immediately had the idea of doing it in one shot, revealing the elements one by one. This was the shot I designed: 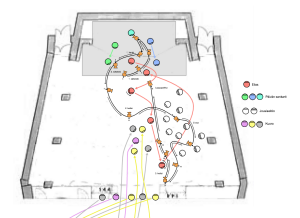 And this is the finished music video:

There are differences between the designed shot and the final one, and you can see stabilization artifacts if you look for them (I did the stabilization myself in After Effects), but Peter’s camera operation is impeccable and for the level of difficulty coupled with a ridiculously tight schedule (six hours to light, rehearse, shoot, and wrap), I’m very proud of what we accomplished. The compositions have been heavily adjusted in post, and most of the lensflares have been added as well. But there are no cheat cuts, this really is one take in its entirety.

We continue shooting Vapaita in about a month, and I’m looking forward to meeting Mr. Mōvi again. I have a feeling we have some exciting adventures ahead.

Thanks to Antti Hänninen and Mika Tervonen for the photos!